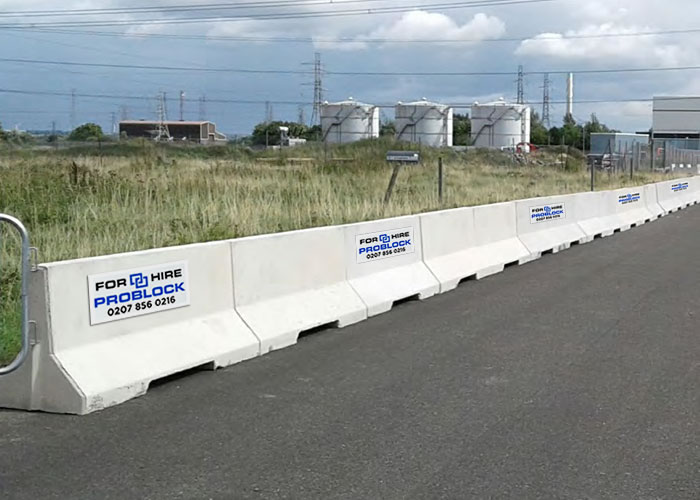 The technical requirements as set out in BS EN13 cover all aspects of the planning, production, installation and construction of concrete barrier blocks. Concrete barriers are commonly used as a divider, flood management resource or for traffic control.

Concrete barrier blocks are typically used for road restraints as well as traffic management and usage as motorway barriers. For a safety barrier to be fit for purpose, the barriers must undergo rigorous testing to ensure they meet the national standards and are suitable for use on roads. Which Road Restraints are Covered by BS EN13?

The regulation with the designation ‘BS EN’ means that this is a European regulation adopted by the UK for incorporation within British standards. As such, any requirement stipulating BS or EN may be considered a fundamental legislative safety requirement.

This set of standards covers a broad scope of road restraints, including:

Concrete barrier blocks bearing the CE marking indicate that they have been tested under EU health and safety requirements. Blocks must adhere to the BS EN13 regulations to be awarded CE marking status.

Traffic control barriers must be tested thoroughly before installation. This assures that the road restraints in place are robust enough to withstand an impact from the type of vehicles typically using the roadway in question.

Road restraints lessen the severity of traffic accidents, protect more vulnerable road users such as motorcycle riders, and avoid incidents by separating carriageways, and preventing out of control vehicles from colliding with oncoming traffic or other obstructions.

The installation of crash barriers or road restraints takes place where a risk has been identified, and the cost is justified in relation to the safety benefits are on offer.

In some cases, safety barriers are not installed, which applies to locations where the severity of a vehicular accident would be less severe should the vehicle not encounter a restraint.

The UK regulations vary from those in some European countries, and testing relies on two-part performance analysis.

Part one of this testing considers the containment level offered. Part two analyses the working width of the barrier.

Working width refers to the width of the barrier blocks, plus how much deflection, or movement is expected to occur when the block is hit. This is a crucial part of the testing since the movement of the barrier needs to be accounted for, mainly where road restraints lie next to a steep drop or another carriageway.

As part of the standardised testing, a barrier designed for normal road conditions will be tested with a vehicle weighing 1.5 tonnes, which is the weight of an average car. This test is carried out at an angle of 20 degrees, at a speed of 70 miles per hour.

For roadways with more substantial traffic usage, or with a higher volume of HGVs, the road restraints used are designed for high containment to cope with impacts of much heavier vehicles.

On these highways, the testing is carried out with a commercial vehicle weighing up to 38 tonnes, at a speed of 40 miles per hour and also at a 20-degree angle.

Barriers must be able to withstand the impact from the typical vehicle they are designed to protect, and cannot be awarded approved status or any regulatory designation until this testing has been completed successfully.

The test analyses the impact to the vehicle, movement of the barrier on impact, and the stability of the structure following a crash.

The Highways Agency oversees the approval of road restraints. Such restraints are typically concrete blocks, and can also be of a flexible material where the conditions require.

Flexible road restraints are typically constructed from materials such as steel wire rope or steel beams.

For UK roads, safety barriers ahead of a hazard must be at least 30 metres long. This applies to any road barriers installed in advance of risk, such as on approaching a bridge spanning a railway line.

In areas presenting a potential hazard such as a bend in the road, a more extended barrier is required to mitigate the severity of any accidents that occur.

Many motorways and roads in the UK incorporate safety barriers well above 30 metres long. The typical height of a safety barrier should be at least 0.61 metres in height, as measured from the base of the barrier to the centre of the supporting beams. (Read more about motorway barriers here)

All road restraints in use must be tested and compliant with these regulations, which also provide detailed requirements surrounding:

Protecting the public during construction projects

Construction sites are busy workplaces often with multiple teams or tradespeople working side by side,…

As a leading supplier of jersey barriers and concrete barrier hire, the Problock team is…

Traffic Management on construction sites – what are your options?